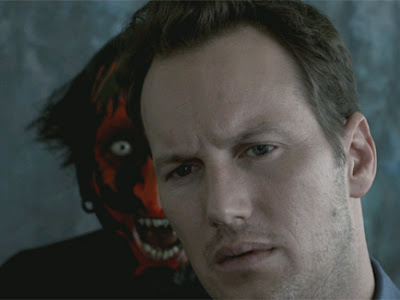 
in·sid·i·ous/inˈsidēəs/Adjective
1. Proceeding in a gradual, subtle way, but with harmful effects.
2. Treacherous; crafty

Insidious is actually two movies; the first one is a suspense building, scare-a-thon with brilliant music and tons of potential. Unfortunately, the second is made up of outtakes from some mid 90's low budget, Canadian, tween, horror program; Are you afraid of the dark?, maybe. So, the best thing I can say about James Wan's film is that through some Andy Kaufamn-esque feat of joke playing, he sold us all on a horror film that is really a mockery of bad horror films. Let's breakdown this shipwreck and see if the critique floats, shall we? 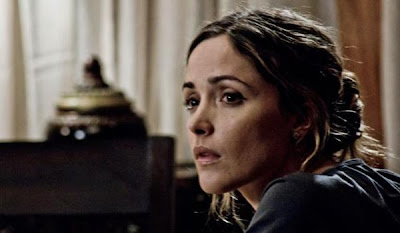 This is Mom; she's played by Rose Byrne who portrays her as being a bit tortured. Mom writes music, for what we don't know, although we see a book in the beginning of the movie that says something about healing through music. So, we are to believe that Mom is going through something and needs to write music because she has to "Exorcise the demons." However, this is never broached throughout the entire movie. Is Mom depressed because her husband is a school teacher, who can afford 2 different huge houses or maybe because she has 3 kids, who aside from the crying baby, seem pretty nice? We get no answers. Maybe I missed something, but that life doesn't sound so bad, stay at home mom, aspiring songwriter, Dad gets the summers off.

Hey, speaking of Dad, there he is again! Dad is a school teacher who used to astral project when he slept, although we don't find this out until randomly Barbara Hershey shows up 3/4 of the way through the film and reminds him of it. Then she tells him he used to be haunted by an old lady ghost who wanted his body. 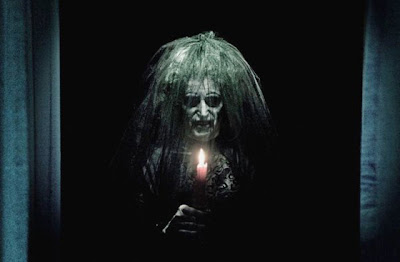 Oh, there she is. Anyways, this is all relevant because Dad and Mom's first born, Dalton has astral projected himself into "the Further" and can't get back because Animal/Darth Maul won't let him.
All of this is actually well done, despite the lack of necessary plot points. It's when Dad/Nite Owl decides to mount a rescue mission, with no preparation that things get, well, shitty.
First thing James Wan, no more smoke machines for you, ever. Your smoke machine license has been irreparably revoked, sorry pal. Dad finds himself in "the Further" and inexplicably, nothing makes any damn sense from there in the film. The demon never gets a full reveal, but we do see him getting down to the sounds of Tiny Tim's Tiptoe through the Tulips with his dolls and puppets while sharpening his metal nails, so there's that, I guess. Plus, were supposed to connect the dots between a spectral kid running around the house grooving to the same jam earlier in the movie and the demon, but we really don't get an explanation. Other than the 2 characters really like the musical styling of Tiny Tim.
I mean, if the point is the Demon was once that kid and wants to be a kid again, I get it, but you really made us work for that.
This movie is a mess, it's almost as if the budget was blown on the beginning of the movie and the film makers got bored and decided to just end the damn thing. Insidious, means to proceed in a gradual, subtle way with harmful effects. I agree with that, perfect name for this move.
Posted by Tim at 8:28 AM